The Dallas Cowboys dragged out their official split with Jason Garrett for more than a week. Then, it took less than 24 hours to secure their next head coach.

Mike McCarthy, the former Green Bay Packers coach, agreed to a five-year deal with Dallas to fill its coaching vacancy on Monday.

McCarthy spent 13 years as the head coach of the Packers, compiling a 125-77-2 mark. He won Super Bowl XLV at AT&T Stadium with the Packers in 2011 and defeated the Cowboys twice in the playoffs during that span.

The early reviews on the hire are generally supportive, including positive responses from former Cowboys quarterback and current Fox broadcaster Troy Aikman, as well as former Packers quarterback Brett Favre.

Here’s a look at what some prominent names around the football world have been saying about the addition:

Aikman: “I think you’re going to see probably a little bit of a different Mike McCarthy in what he wants to do offensively, maybe as well on the management side of things. But I think it was a really good hire. He’s obviously been hugely successful by any measurement as a head coach. I think the Cowboys picked the right guy.”

Cowlishaw: « On paper, the Cowboys made the most logical decision in the history of Jerry Jones coaching hires Monday. But remove the paper and turn on the microscope and question marks hover just beyond one’s focus.

“I will give the club credit for hiring Mike McCarthy as the franchise’s ninth head football coach. He’s a man who became accustomed to taking teams to the playoffs (eight straight seasons, nine out of 13), while in Green Bay and he already knows what it’s like to not only hoist a Lombardi Trophy but to do it in AT&T Stadium.”

Favre: « Mike’s a smart guy. He knows that, and he knows that maybe, at times, Jerry will interfere or say things that you don’t necessarily agree with or don’t like. But it is what it is. I’ll say this, Mike is one of those guys from Pittsburgh. He’s hard-nosed. He’s tough. He is an aggressive personality. If there’s anyone out there presently that can handle that, it’s Mike. I believe that wholeheartedly. … I think it’s a good fit for Mike, and I think it’s a great fit for the Cowboys.” 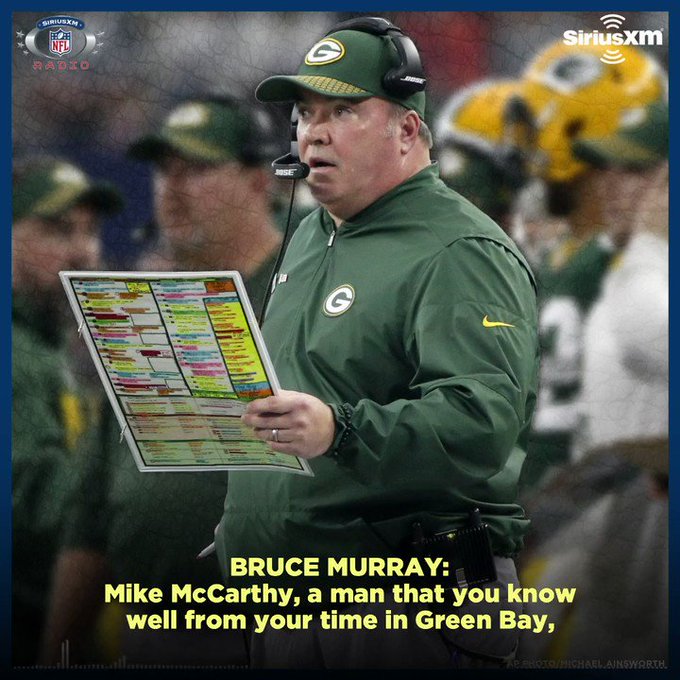 « I believe that he is tailor-made for that job. »

-HOF Quarterback @BrettFavre on Mike McCarthy being named the new Head Coach of the @DallasCowboys.

Sherrington: “Dak [Prescott]’s liable to be the Cowboys’ quarterback for a long time, which is fine with me, but he’ll never be as good as the one McCarthy left in Green Bay. No one rises to that level. What the Cowboys must hope is that McCarthy’s track record and newfound interests can make Dak Super Bowl-worthy.”

Quinn: “He was the best candidate for I think where this team is at right now. He’s a proven winner, won a Super Bowl, I think he is going to be great for Dak Prescott moving forward given his past experience working with Aaron Rodgers. And so it makes the most sense as opposed to some of the candidates that didn’t have any NFL head coaching experience before, or didn’t have the resume that Jerry Jones and Stephen Jones are ultimately looking for.”

Have to think the Cowboys have become immediate contenders in the NFC for 2020 with Mike McCarthy at head coach! Great to see him get another shot and with a talented roster to boot.

First question for Mike McCarthy at his Cowboys press conference has to be, « Did Dez catch it? »

There was no better coach for a team as talented and ready to compete as the Cowboys were than Mike McCarthy.

I don’t know how I feel about the fit with Dak, but this is the culture reset the Cowboys needed.

This is a really smart hire. Some people have forgotten about Mike McCarthy’s success due to the end of his tenure with the Packers. He’s a REALLY good coach who is just what the Cowboys need as a leader and offensive mind. https://t.co/IhgqU9qGSc

The Giants liked McCarthy. He’s now off the board. Big move by the Cowboys. If McCarthy proves willing to adjust in his next job (a la Andy Reid) Dallas is going to be a problem for a long time with that roster. https://t.co/0vmvZrGxxX

If the interview did so much to convince the Jones’ that McCarthy was the right man…then the interview process is important…and I think the Cowboys should’ve interviewed more candidates.

Mike McCarthy basically got Jason Garrett the Cowboys’ coaching job (faster) by whipping the tar out of the Cowboys in 2010. Wade fired the next day.

McCarthy then goes 5-1 vs. Garrett-coached Cowboys, 2-0 in playoffs …

Then takes Garrett’s job. The NFL is strange but great.

I like the Mike McCarthy hire because he’s had proven success. Just wondering who the DC is going to be. That’s a big hire.

There are good things and uncertain things about Mike McCarthy hire. Strangest is the HOPE that he has changed through this odd analytics-driven coaching team thing he has been doing while unemployed. The man coached GB 13 years and Cowboys are hoping they get a different guy.

Any cookies that may not be particularly necessary for the website to function and is used specifically to collect user personal data via analytics, ads, other embedded contents are termed as non-necessary cookies. It is mandatory to procure user consent prior to running these cookies on your website.